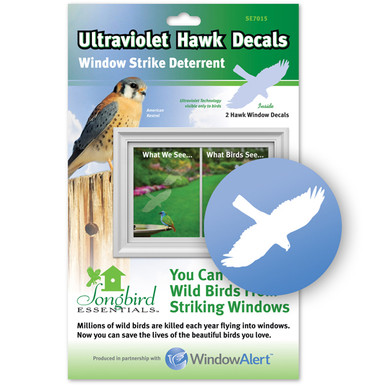 To the human eye, the decals appear as frosted or etched glass. The Hawk decals measure approximately 8 1/2" x 5" inches, and are designed to be placed on the OUTSIDE of a window. As a rough guide, we recommend one decal for every 3' x 3' section of glass. Reapply decals every 6-9 months.

Save Birds: WindowAlert Products and Installation 01:42

Now You Can Protect Wild Birds From Striking Windows http://www.windowalert.com/ Millions of wild birds are killed each year flying into windows. Now you can save the lives of the beautiful birds you love.